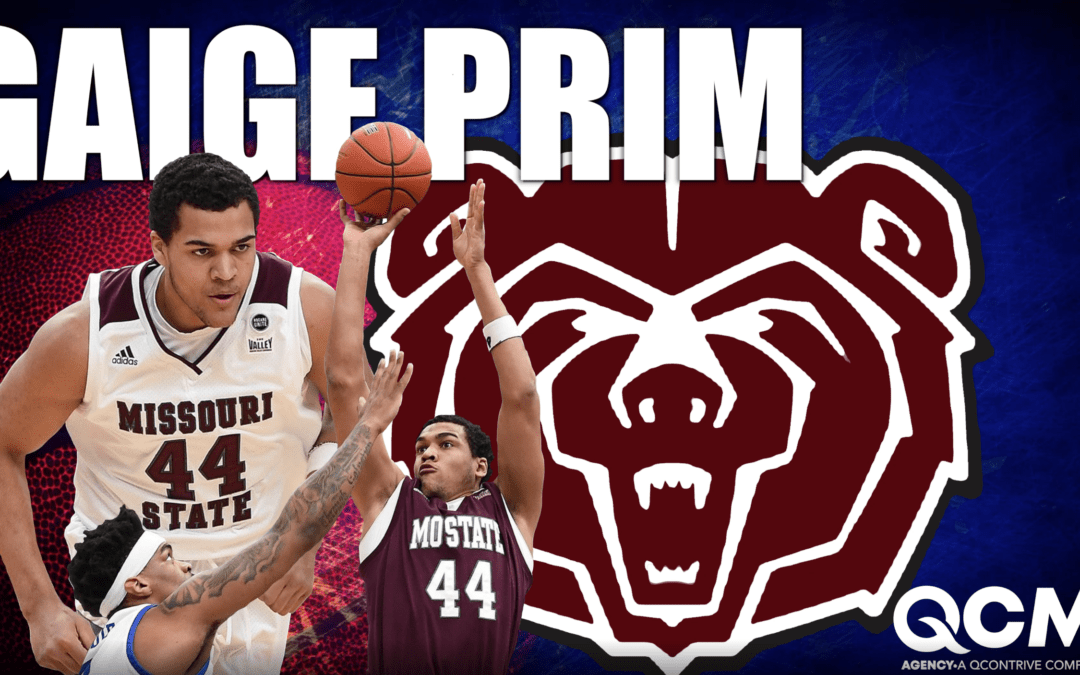 At QCM, sports are a passion for our team. That’s why we’ve decided to build up our presence and emphasis on athletes by launching NIL, our new branch that will help athletes amp up their brand and identity in the sports world and beyond.

We are incredibly excited to announce one of the newest members of NIL at QCM, Gaige Prim!

Gaige Prim is a senior forward for the men’s basketball team at Missouri State University. Hailing from Aurora, Colorado, he was a standout performer from the start. In high school, he was named to the Colorado 5A all-state team, shooting nearly 60% from the field, 71% from the line and averaging 17.1 points and 10.6 rebounds per game.

Prim began his collegiate career at West Texas A&M, a Division II school where he earned conference Freshman of the Year honors and recorded eight double-doubles throughout the season. He then transferred to South Plains College (Texas) for his second season, where at 6’8, he was able to once again flex both his height and agility to move past defenders and prove himself as a valuable scorer, starting in all 34 games.

In the 2019-2020 season, Gaige found his new home in Springfield, Missouri with the Bears where he immediately made an impact, earning All-MVC third-team honors and MVC All-Newcomer Team distinction. In the 2020-2021 season, Prim was named to the All-MVC first team as well as the MVC All-Defensive Team and MVC All-Tournament Team. He also impressively finished 10th nationally in field goal percentage with a .599 clip.

Basketball excellence is actually in Gaige Prim’s genes — his mother, Tracey, played college basketball at New Mexico Highlands. Outside of basketball, Prim has been named to the Missouri State Athletic Director’s Honor Roll multiple times. He also has two brothers, Case and Dayne.

We are thrilled to be supporting Gaige Prim throughout his career as a Missouri State Bear and beyond!